Helping you achieve your culinary dreams.

How to Make Healthier Pancakes

Both hard white and red wheat are common in whole wheat flour, hard white wheat is traditionally the “all-purpose” whole grain flour. Hard white wheat is stronger in gluten and proteins than soft wheat, making it ideal for bread, pizza, biscuits, muffins, and pancakes! A serving of wheat contains nearly 20% of the recommended daily iron intake, about 13g of protein and 11g of fiber, giving it a much stronger nutritional value than bleached all-purpose flour. To substitute whole wheat into recipes, start by substituting only half, and adjust based on the turnout of the texture.

In order to start off the day well, you need a nutritious breakfast, that will keep you fueled for the next few hours. Pancakes have been a breakfast staple, but a lot of people choose boxed pancake mixes since it’s a quick and easy option. We all love pancakes, however, they can be made with bleached flour, relatively high in fat, sugar, sodium and empty calories. What that means, is that you’ll be adding to your daily calories, but not receiving any nutritional value. Instead of giving up your favorite breakfast completely, just lighten them up a bit! Pancakes can be a really nutritious breakfast if you use just a few healthy swaps. To make delicious and nutritious cakes from scratch, all you need are a few simple ingredients, a bowl and a whisk!

Forget the store-bought box mixes. These Whole Wheat Mini Pancakes are delicious and much healthier for you than a traditional stack. They’ll keep you fueled instead of weighing you down! 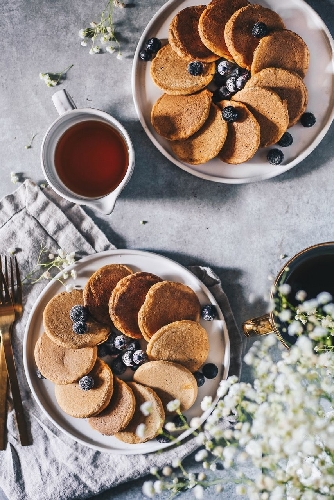 Filed in: Breakfast & Brunch
Recipe by: Natalia Wrobel Katz
Source: nattwrobel.com
These Healthy Whole Wheat Mini Pancakes will make you not want to make regular pancakes ever again! Perfectly fluffy, light and easy to prepare. I chose to use white whole wheat flour, as it has a milder flavor and softer texture than a regular whole wheat. It's as nutritious as whole wheat flour (high in fiber, vitamins B and minerals). Don't forget to top them off with a drizzle of maple syrup!
Total Time
15 minutes
Yields
21
16 Like
Share
Tweet

If the batter is too thick just thin it out with a little more milk. Pancakes can be made on a regular pan as well. If you like them bigger just use 1/4 of a cup to scoop the batter out.

Buckwheat Soup for a Cold Evening

Buckwheat is lesser known as a gluten-free grain, although a great option for those with sensitivities. As a pseudo-cereal, buckwheat can be ground into flour, flaked, or cooked. It’s rich in complex carbohydrates, protein, fiber, B-vitamins and several other trace vitamins and minerals. Buckwheat flavor pairs nicely with dried spices, beets, walnuts and hazelnuts.

As the weather turns colder and fall steps in, “cold weather soups” are an indispensable part of the menu. I would like to share with you one of my favorites—buckwheat soup!

Buckwheat is filling, super healthy and delicious. When it’s raining or freezing outside, what’s better than to snuggle on the couch in your PJs with a warm blanket, good book or movie and a huge bowl of warm yummy soup? For me personally, soups are good in any weather, but I especially love winter soups: lentil soup, chicken soup, potato carrot, and buckwheat soup are definitely on my “short list” of favorites. 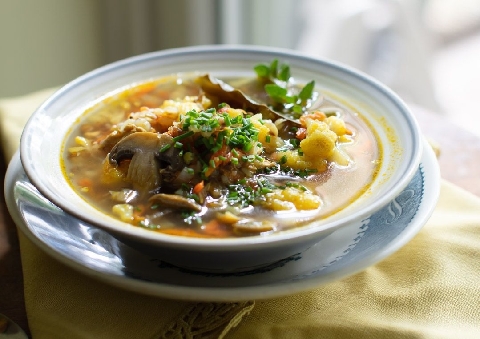 This version of Buckwheat soup that I’m sharing with you today is made with chicken. However, this can be easily turned into a vegan soup by simply omitting the chicken.

Having various grains in your pantry gives you many options for the the recipes you can make, and a single grain can be used in several different forms. For example, einkorn is a delightfully chewy whole grain that also makes a beautiful wheat flour. I like the in-between state, especially for porridges and risotto—a state where the whole grain is pulsed in a high-speed blender or grain mill until the majority of grains have cracked, like in this cracked einkorn risotto. The cracked grains bring the texture while the flour helps to thicken the risotto. I use a similar technique to make porridge out of barley or millet. Learn how to crack grains at home and you can have endless creative side dishes. 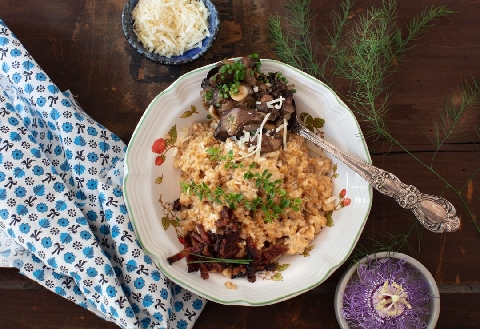 To Cook the Risotto:

To sauté the mushrooms:

I served my risotto with crispy bacon on the side, my boys loved it!

Today I’m bringing you a recipe for homemade freshly pressed apple cider. It hardly requires a recipe though—that’s how simple it is. But aren’t the simple recipes just the best? All it requires is a few of your favorite kind of apple, cinnamon sticks and of course a Tabletop Fruit Press.

Grinding the apples is needed to get the most out of them. If you don’t own a fruit grinder you can easily use a food processor. First, halve or quarter the apples and pulse a few times. Then place them  into the Tabletop Fruit Press chamber. Make sure to put the mesh bag inside the basket. It will contain mash even under very high pressure and make clean up much easier! The press plate can be screwed to your choice of surface or just held by the bottom while squeezing the juice.

Besides being delicious in taste, apple cider is a good source of potassium and iron. It’s pure, sweet and natural with no sugar added! 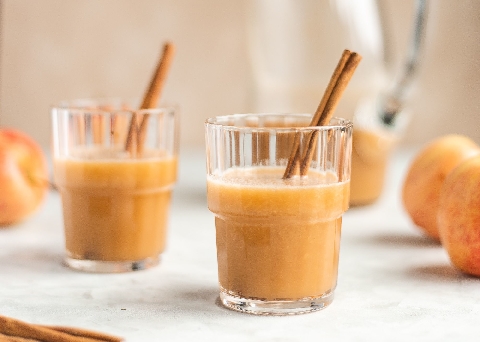 Filed in: Beverages
Recipe by: Natalia Wrobel Katz
Have you ever had apple cider fresh from the press? If not, I can assure you, it's the best drink you will ever have. This apple cider is made with fresh organic apples and has delicate hints of cinnamon. Simple and delicious! Nothing compares to freshly pressed raw apple cider and its amazingly pure and refreshing flavor.
Active Time
25 minutes
Total Time
25 minutes
Serves
10
9 Like
Share
Tweet

Why haven’t we heard of this ancient grain until recently? In part, because there were only a few hundred acres of einkorn being grown worldwide and the grain was on the threshold of extinction — which made the relic grain hard to find.

Einkorn hasn’t been widely produced for many years because it’s more difficult to harvest and yields only one fifth as much volume compared to modern wheat. But interest in einkorn has grown rapidly as awareness of its great nutritional advantages has spread.

The protein content of einkorn is 30-50% higher than in modern wheats. In addition to its high protein content, einkorn contains large amounts of essential fatty acids, antioxidants lutein and beta-carotene, minerals phosphorus, iron, zinc, potassium and manganese, and vitamins A, B2 and B6. Einkorn also contains 30% less starch than modern wheat.

Einkorn is a diploid grain, meaning it has two sets of its seven chromosomes for a total of 14 chromosomes, whereas modern red and white wheats, and spelt, have six sets of seven chromosomes, for a total of 42 chromosomes. The simpler genetic structure of einkorn makes it easier to digest than modern wheats. Many people who experience gluten sensitivities are able to enjoy baked foods made with einkorn flour, but since einkorn does contain gluten it isn’t recommended for people with Celiac disease.

Einkorn berries can be cooked for a side dish or hot cereal, or ground into flour and used in a variety of baked goods. Whole grain einkorn flour can be used in place of any other type of wheat for breads, pasta, pancakes, biscuits and more!

Bread dough made with einkorn flour is less elastic than dough made with modern wheat, and because there isn’t a lot of elasticity to develop, einkorn dough can be fully kneaded in a very short time. Einkorn bread dough can easily be mixed and kneaded by hand. The gluten structure of einkorn is less strong than that of modern wheat, so to preveent falling while baking, it’s important not to let einkorn over-proof.

Einkorn flour absorbs less liquid and takes a little longer to absorb liquid than modern wheat flours do; this should be taken into consideration when substituting einkorn flour for modern wheat flour in yeast bread recipes. A good place to start when converting yeast bread recipes for einkorn is to use ⅓ less liquid than the recipe calls for (eggs and butter shouldn’t be considered a liquid).

Whole grain einkorn flour can usually be substituted in equal measurement for modern wheat whole grain flour in quick breads, pancakes, cookies and cakes, but generally you’ll need to reduce liquid by 10-15% in these recipes. Einkorn doughs and batters will be a bit stickier to work with than those made with modern grains, but baking results are not adversely affected. We recommend The Einkorn Cookbook as a great resource for tasty, wholesome einkorn recipes.

The word einkorn is German and means “one kernel”, referring to the single floret in a spikelet of einkorn grass; modern wheats grow 3-5 florets per spikelet. Einkorn is also known by other names including farro piccolo (Italian), shippon (Hebrew), and le petit épeautre (French).

You can find more information about einkorn here.

A few tips for baking with einkorn flour: 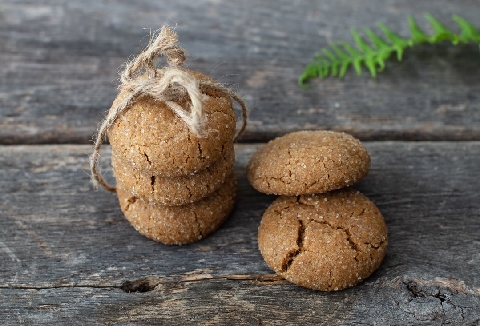 Filed in: Cookies & Bars, Snacks
Recipe by: Yelena Strokin
Source: Cooking Melangery
The cookies come out of the oven really soft, but they set up perfectly after cooling. This is a balanced combination between the spices and einkorn flour earthy taste.
Active Time
20 minutes
Total Time
40 minutes
Yields
25
155 Like
Share
Tweet

You can make much bigger cookies, for that roll about 1 1/2 inch balls of dough and bake. Increase your baking time by a few minutes. You will get 16 large cookies.

Submit your own recipe