Despite a high volume of orders in recent days, our amazing shipping team continues to ship orders out quickly. Today we're shipping orders placed March 26. Our customer service department remains open, but due to higher call and email volume, our response time has slowed. If you’re unable to reach us by phone, please leave a message and we will get back to you as soon as possible. Our Hampton store is temporarily closed. We greatly appreciate your business as we do our very best to serve you during this challenging time!
Free shipping on orders over $59!*

Helping you achieve your culinary dreams.

Great tacos require great tortillas, and I can assure you, once you try these Homemade Corn Tortillas made from real corn masa you won’t go back to store-bought ever again!

The first step to make fresh masa will be preparing nixtamal (corn that’s gone through the nixtamilzation process), which is really easy! It’s a simple process that’s beneficial in a few ways. Since the outer skin of corn kernels slip off, it makes the corn easier to grind and the soaking process helps our bodies absorb all the nutrients in corn which are normally inaccessible (mainly niacin). What’s more, nixtamalization creates that rich and amazing flavor distinct in masa, and it allows you to create a dough from ground corn. When mixing corn flour (or cornmeal) with water, a dough won’t form, you’ll just have a soupy corn flour mixture. By mixing masa with water, you’ll have a formable dough that can be made into all kinds of delicious recipes, including tortillas!

Making your own masa requires dried yellow dent corn, pickling lime (also called “cal”, which you can find it in any hispanic market or online) and a grain mill that can grind wet grain, such as the Wonder Junior Deluxe grain mill with masa auger.

Start by rinsing the corn. Then, in a large non-reactive pot, mix together corn, water and pickling lime. Bring it to a boil, immediately turning down the heat and simmer for 45 minutes, making sure the corn is always covered with the liquid. Cover the pan and let it soak overnight. After soaking the corn kernels will look like this:

You’ll notice that the outer skin of the kernels slip off very easily. Drain and rinse the corn thoroughly under cool water and rub handfuls of the kernels between your palms allowing the outer layer to fall off. Don’t worry about getting every single one! Just make sure to keep rinsing until the water starts to run clear.

Then, place the strained corn in your grain mill and grind it all!

Once you’ve ground all the nixtamal, add salt and a little water until you can form the dough into a ball. Make tortillas by shaping the dough into small balls and pressing each of them flat. You will get the best results by using a tortilla press. Bake tortillas on a preheated griddle, cast iron or nonstick skillet, on each side for 1-2 minutes or until brown spots start to appear. Keep the tortillas warm by wrapping in a cloth or storing in a tortilla keeper. 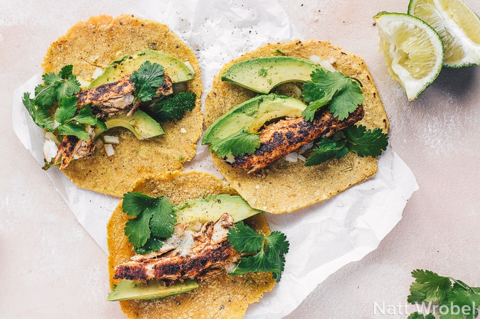 Celebrating winter with a hearty breakfast

Mornings are a special time of day and a hearty country breakfast, cooked simply and served with care feeds both the body and soul. Hot porridge on a winter’s day is so thoroughly satisfying and always reminds me of snow-covered trees and warm, cozy kitchens. Setting bowls of oatmeal before my children on a cold morning makes me feel better about sending them out to the side of the road to wait for a school bus. In our home, we love to include honey or maple syrup, fruits, nuts, and good country butter to make our hot cereal sweeter on a blustery Saturday morning, shoring up energy for the household tasks we have set for the day.

Steel cut oats, also called Scotch or Irish oats, are oat groats that have been chopped into 2-3 pieces. If you don’t have steel cut oats, flaked/rolled oats can be used for this recipe; they’ll cook a little faster than steel cut oats.

To make a homemade almond milk I use the Tabletop Fruit Press, which makes it so simple. Store the milk in a covered glass jar, bottle or pitcher in the refrigerator, it’ll be good for 4-5 days. 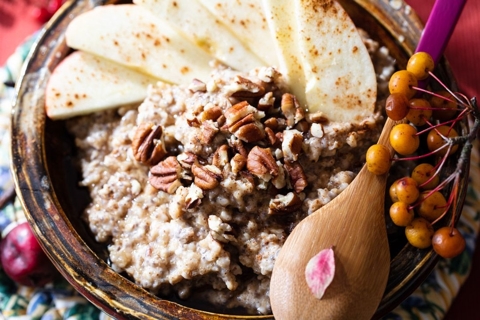 Every season brings something special, and now is the time when you slow down and get ready for a snowy cold winter. This season means comfort food: stew, porridge and of course soups. I am loving preparing soups, especially for the cold days. I take my time to cook a broth first and then my imagination goes wild.

I like to cook with grains, as it brings extra texture and earthy flavors to my soups. Barley is a unique grain for me: it so simple yet it reminds me of the scent of fireplace and old cabin in the woods. You take a long walk among the trees, and you come back home where a beautiful bowl of soup with barley is cooked for you—hot and tasty. This barley soup is my husband’s favorite; he told me that he could eat it every day! 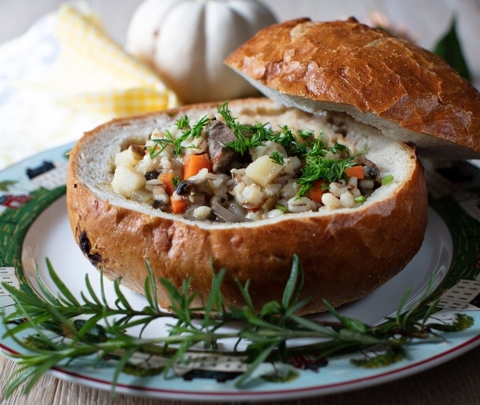 Cooked buckwheat can be made into a side dish similar to rice, added to casseroles and soups or made into breakfast porridges. Buckwheat groats can be cooked in two ways: first, by cooking directly in liquid, which can produce very mushy results, or by toasting first and then cooking in liquid. Toasting the buckwheat prior to cooking helps separate the buckwheat to yield an elegant and flavorful side dish. Toasted buckwheat groats, or kasha, has been a staple food of European peasants for many years. 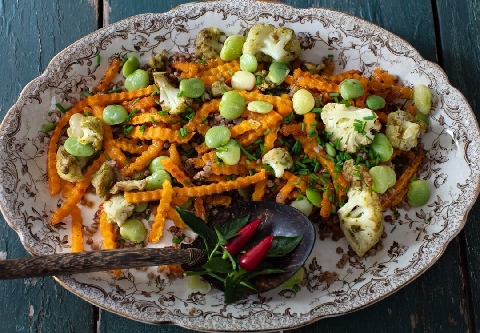 To toast the buckwheat, pour the buckwheat groats into a dry skillet and heat for 4-5 minutes until golden brown, stirring continually. To cook, combine 1 cup toasted buckwheat and 1 cup water in medium pot. Add 1/4 tsp. salt and 1 tsp. olive oil. Bring to a boil. Cover with a lid, reduce heat to simmer and cook until done, about 5-10 minutes.

The tabletop fruit press is built perfectly portioned for in-home use. Holding up to 1.25 gallons of apple pulp, the stainless steel designed is sturdy and easy to operate. The press can be used to make apple cider, nut and soy milks, grape juice, honey and more!

The lever twists easily, allowing the pressing plate to reach the bottom leaving zero gap and creating a maximum juice yield. Many tabletop fruit press owners choose to screw the anti-rotation plate to a small sheet of plywood which can then easily be clamped to your table or other support.

The tabletop fruit press will have you sipping on delicious ciders in no time! There’s still time to enter our giveaway to receive one of these amazing presses FREE!

Once you have a press of your own, here is a delicious cider recipe to enjoy!

Submit your own recipe

Store
Our store is closed until further notice due to precautions we're taking for COVID-19. We're sorry for the inconvenience!